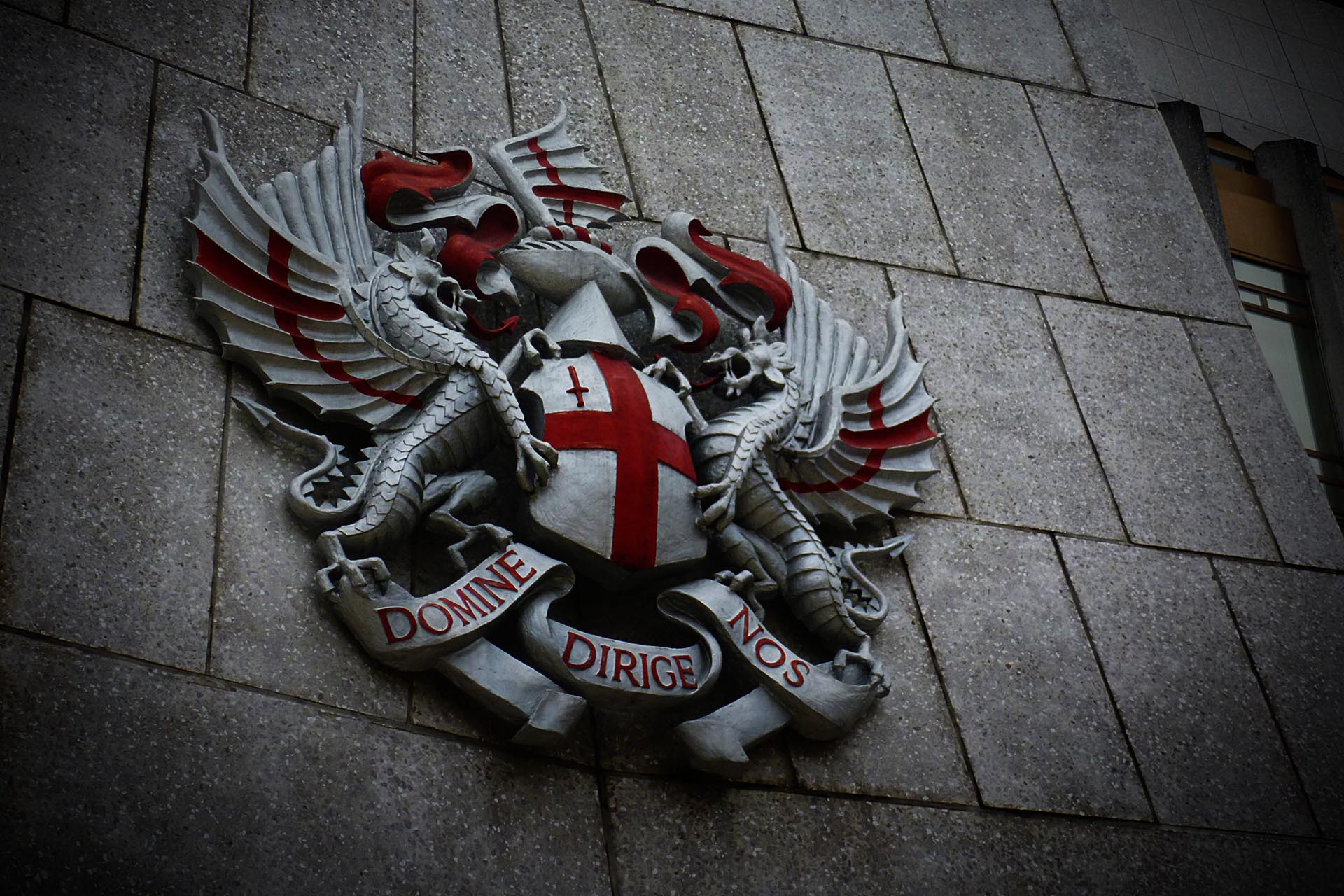 One need not walk far in London to discover typefaces both famous and historic. In fact, as it turns out, one need not even leave the immediate vicinity of London Bridge Station.

It was a bleak day out in the City of London — the one-odd square mile that is home to the corporation which owns half the capital — and the light lent itself to a series of shots depicting the various styles of typography that pervade one of the most visually dynamic cities in the world.

One end of a street may feature skyscrapers tall enough to disappear into the mist and the other has buildings from several centuries back, still standing tall in spite of both time and the city having been bombed to bits during the wars.

Yes, it was Remembrance Day, and we all collectively remembered what little we could of what happened almost a full hundred years ago, whilst going about our business just as if it had been any other day, the minute of silence as loud as the rest.

Starting the journey from the busiest railway station in London, straight away one comes across a typeface that was made and has seen a good share of its usage right here. Originally from Clerkenwell in Islington, a short walk north of the river, Clarendon was first released in 1845. It was designed by Robert Besley who would become the Lord Mayor of London two decades later.

Aside from its usage both above and below ground in London, Clarendon travelled across the Atlantic Ocean and appeared on the wanted posters iconic of the American Wild West; the effort to bring Four-fingered Jimmy to justice would be aided by the people whose tea was vindictively tossed into the ocean.

A lesser-known but more ironic usage is by the German Empire for declarations during the Great War, when they were essentially telling us Londoners to sod off using our own bloody typeface. Mitigated, luckily, by how Nazi-Germany would some years later send out a document banning the use of the font Fraktur. Apparently, no one in the government noticed that the letterhead of that document was in the very same font they were banning.

In more modern days, Clarendon has likely been seen by almost any given person with a few pieces of electronic kit in their home, as the consumer electronics giant Sony uses it for their logo. Another, if less attractive, example is the logo of banking corporation Wells Fargo.

All the typefaces one encounters in London weren’t made here. One such is Futura, designed by the German Paul Renner in 1927, from the same country that would three decades later bring us the one and only Helvetica; either the one true font or an overused piece of history, depending on which side of the aisle you’re sitting.

Ushering in a new era of geometric typefaces that litter the landscape to this day, Futura is used not only on roadsigns in the London borough of Southwark, but all over the globe, from films (American Beauty, V for Vendetta), the furniture giant IKEA (until 2010) and the recent video game hit The Elder Scrolls V: Skyrim.

Southwark’s choice to use it is likely related to its close similarity to another font used widely in London. If there is any typeface that every Londoner would know, this would be the one.

To many English-speaking people of the world, the train that travels underground is known as the subway, but to the inventors and proprietors of the language it is known as either the underground or the tube. One should note, however, that none of the three include any mention of rails or trains.

Commissioned in 1913 by the current commercial manager of The Underground Group (now part of London Transport), Frank Pick, the typeface was designed by Edward Johnston and his student Eric Gill, the former also serving as its namesake. Twenty years later, strongly influenced by the work he did with his teacher and mentor, Gill released Gill Sans, which incidentally is the font used in Avidmode’s wordmark.

Johnston was rolled out during the London Transport rebrand of the 1930s and many of the original enamel signs still remain, such as the one of Temple Station above. The others use a redesigned version made by Eiichi Kono in 1979, an at the time very young typographer of Japanese descent, fresh out of university.

New Johnston was made with the intent of retaining the original look with two additional weights, bringing the total up to the modern-day minimum of three, enabling the typeface’s use in print.

Personally, I find the look of Johnston comforting, as it so often indicates that I both am and soon will be home; that I am in London and that I’ll be in my residence. Public transportation is for going home, I like to think.

On the south side of London Bridge sits a road sign worn by the elements. Having just passed the dragons that watch over the border to the City of London, the typeface is different from the modern, clean sans-serif style of the others — it is Albertus, designed by Berthold Wolpe in the 1930s and named after the German philosopher Albertus Magnus of the 13th century.

Its straight stems and sharp edges are reminiscent of the classical lettering used by the English royalty throughout much of the 19th century and the slight outwards serifs make me think of the old Blackletter script from hundreds of years before. Unsurprising, perhaps, as the font was designed to imitate the style of engraved lettering, often featuring the same slight serifs, dating all the way back to Roman times.

As the typeface of choice of the Corporation of London, it is prevalent throughout much of the City; on plaques, road signs and buildings, not to mention its own coat of arms: two dragons holding a shield, with the Latin phrase Domine dirige nos written below, “Lord, direct us.”

The lack of an inwards tie on the capital G is unusual for its time, the pivotal and fundamental geometric font Futura having been released only a few years prior, forsaking the highly ornamented style that had been pervasive ever since the advent of lettering.

Nonetheless, the stark and proud Albertus is excellently legible in capitals whilst still retaining enough identity to be recognised as an English regality.

As a designer and avid fan of typography, I find that even the subtle and obscure of London bring with them a great deal of inspiration. All the people that have passed through this city have lefts marks on it, many of these marks surely the process of years; of passion and dedication. The more time I take to examine the pieces that have been retained for many years, the more I see the reason why they were kept around.

Typography is the voice of the written word and it has yet to cease impressing me, in a way that only the oft-unexamined and overlooked can.